Super Smash Bros. has been a literal ‘smash’ hit for so many years now with each iteration adding something new for players to enjoy. Now we have the Nintendo Switch, yet another franchise entry has been released for all to jump into – Super Smash Bros. Ultimate.

With these new consoles being brought into the fray, there have been a number of different controller options for people to utilize in their efforts to secure their next victory in Smash Ultimate but which is the top selection? Well, that’s what we’re going to look at today.

Let’s get into the best controller for Smash Ultimate money can buy!

The problem with picking out the best controllers for a game like Smash Ultimate is that everyone has their preference of layout and how the button presses feel. However, one factor we just can’t ignore is that most of the community opts for a controller that’s of the GameCube ilk.

Due to this, most of our top picks offer up that traditional GameCube feel which will hopefully serve you well. Additionally though, we aimed to include picks that also catered to others, maybe the newer generations that haven’t experienced the GameCube and those transitioning from more ‘arcade’ fighting games. 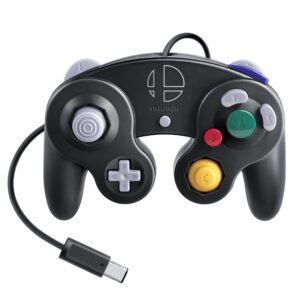 We’re sure that this isn’t a surprise to many but our pick for the best controller for Smash Ultimate is the GameCube controller.

The GameCube controller is one that has been a fan favorite since Melee due to its fantastic button layout, perfect for Smash. Moreover, the feeling of the buttons is stellar, with every press registering well. This is essential for Smash Ultimate where every single input matters in the heat of battle.

It obviously has the exact same design and shape compared to the classic controller released in 2002 but with updated materials to make it more robust. This model in particular sports the Smash Bros. logo that we all know and love which is a nice little addition and one that any Smash Ultimate fan will enjoy. It is also a wired controller don’t forget so for someone looking for a wireless option, this might not be for you.

The only real downside to the GameCube controller is that you’ll need to pick up an adapter if you want it to work with your switch. This is because it uses the classic connector and not a USB cable. A little annoying but if you want the best Smash Ultimate controller, we’re sure you’ll be willing to pay that little bit extra.

If you want the GameCube controller feel but don’t have the cash to drop on the real thing, a fantastic alternative is the PDP Wired Fight Pad Pro. As you can see from the product image, it offers you the same GameCube controller aesthetics but at a lower cost so you can get your smash on without breaking the bank.

Looking at it, straight away you think GameCube with the exact layout of the classic controller albeit those extra buttons that are necessary for the Switch’s functions. This means you can pick up right where you left off in Smash Melee from back in 2002 and get going on Smash Ultimate. The only big difference is the triggers. These have a more ‘modern’ feel with a clicky press rather then the full push down feel of the classic version.

There are a bunch of different designs too including The Legend of Zelda, Mario, and Sonic which could be perfect for those wanting to add a little flair to their Smash Ultimate setup. Moreover, if one of these designs coincides with your favorite character then there’s no question the Wired Fight Pad Pro is a worthy pick up.

While not sporting the GameCube look, we think that the Nintendo switch pro Controller is still an absolutely stellar option for Smash Ultimate.

Being the go-to for a wide variety of other games due to its fantastic overall feeling, being made from quality materials, and providing you with a more Xbox-like button layout, the Switch Pro controller really is great. If you’re used to the GameCube controller, it is slightly different but all the buttons and sticks are in similar places so there shouldn’t be too much adjustment needed.

The big plus for those wanting to get all their friends round and play a bit of Smash Ultimate is the fact that it is wireless. This allows you to remove those pesky cables and ensure no one trips over them after they celebrate their victory. The battery life is fantastic also, which is great news for those that worry about it failing them while playing, as well as utilizing that USB-C port that the Switch also sports.

Naturally, if you’re wanting to compete at the highest level for Smash Ultimate, the fact that this is a wireless controller might be a bit of a downside for you as there will be those few milliseconds extra when you press buttons. This is however unnoticeable to the average player so don’t let this deter you.

If you want a pretty great controller for Smash Ultimate but are not looking to break the bank, this HORIPAD could be exactly what you need.

The HORIPAD looks very similar to that of the Switch Pro controller and for good reason considering it’s one of the top controller options out there. The big departure is with the increased directional pad size and could benefit you taunting Smash players as those buttons are mapped to the directional pad inputs. Additionally, it utilizes wired functionality over wireless. While you might think that this is a downside at first, there are big advantages. These include less input lag and the trust in it staying constantly connected.

One difference between this controller and all of the others we’ve listed is the fact you can detach the directional pad all together and simply use the buttons underneath. This does have its pluses and will maybe help you not accidentally hit them during intense battles on Final Destination.

The overall durability and feel of the HORIPAD is good but you can tell it is a more budget model. While this might be perfectly fine for some, for those looking for longevity in their Smash Ultimate controller, you could be left a little wanting.

While all of our other picks focus more on the more traditional controller feel, we can’t ignore you arcade lovers. That’s why we’ve included the HORI Switch Fighting Stick Mini which mimics the arcade fighter controls and allows you to use them in Smash Ultimate.

It utilizes the traditional arcade stick for movement as you would expect with eight action buttons that are mapped to the usual Nintendo Switch inputs. These buttons are in two lines of four which you veterans should be used to and be able to get going right away. There are also Switch function buttons on the top right of the device, certainly handy and removes the need to hook up another controller that has them.

This is a wired controller, which you would expect considering that you’d probably want to compete at the higher levels, and decreases any input lag. The button presses feel top tier and definitely replicate that of what you’d experience at any arcade for real.

The actual form factor of the HORI Switch Fighting Stick Mini is actually more compact than it looks. Therefore, it is still a portable solution for Smash Ultimate and you’ll be able to carry it to your friends house or to tournaments if you’re a competitor. It’s highly durable also which means it’ll take those bumps and hits when in your backpack or somehow manage to drop it on your travels.

Your controller’s layout is a massive factor in how you perform in Smash Ultimate as you need to feel right at home with all of your button presses. While most opt for a GameCube controller layout due to familiarity and reliability, it can be a little hard to get used to if you’ve never picked one up before. A more ‘modern’ layout like the Switch Pro controller could be more up your alley and actually allow you to win more fights due to this.

With a game like Smash Ultimate, there’s a huge competitive element that may influence your choice in the wired vs wireless controller debate.

If you want the absolute lowest input latency and no worries that your controller will die at any point, obviously the choice for you is a wired controller. However, if you’re more of a casual Smash Ultimate player and aren’t too bothered about the fastest inputs, a wireless option could be the way to go. Moreover, if you are someone who likes to get all your buddies round, a wired variant could get extremely messy, especially if you have four players. So, again, a wireless Smash Ultimate controller is the route you should go down to counteract this.

Overall, if you want the best controller for Smash Ultimate, nothing can really top the GameCube. It’s been a staple for so many years now and players new and old should be able to maximize their performance in-game with a controller of this ilk. On the flip side, if you simply don’t like the GameCube controller layout at all, we’d probably recommend just using the Pro Controller as this offers some pretty excellent button presses that should certainly allow you to hoover up those player stocks. 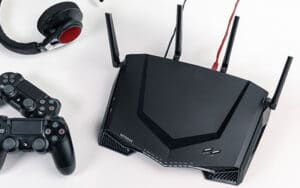