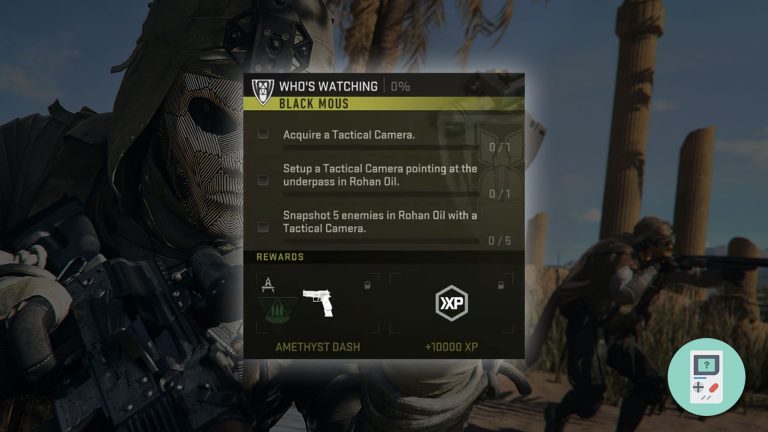 In DMZ, there are a whole host of Missions available to you once you complete the initial batch of Legion ones. This offers up much more variety than your simple point A to point B exploration, or finding a certain item and extracting with it.

One such Mission is Who’s Watching, which tasks you do perform something a little different with a Tactical Camera, potentially an item you haven’t used yet in your DMZ journey. Below, we’ll take you through what you need to do with the DMZ Tactical Camera so that you can complete the Who’s Watching Mission and you can move on to the next one.

Before we get into how to complete Who’s Watching, lets run through the steps of the Mission. Here is exactly what you need to do:

Now, the first of these steps, acquire a Tactical Camera, is initially throwing players off as a lot don’t know what they are. Tactical Cameras are actually not a typical item you’ll find out in Al Mazrah. Instead, it’s a piece of field equipment known as a Field Upgrade that you can equip. Luckily, you don’t need to locate one of these in your DMZ match because if you’re smart about it, you can equip one pre-match and use this for the Who’s Watching Mission. This certainly eliminates some of the hard work and cuts down the completion time significantly.

Once you have the Tactical Camera equipped, you’ll need to head to Rohan Oil as the second step suggests. The ‘underpass’ however isn’t exactly marked on the map so again, this is confusing players, probably including yourself. To find the underpass, you’ll have to go to the Rohan Oil Tunnels as marked on the map below.

Once there, look for the access to Rohan Oil Tunnels from the road and you should be able to see an opening. Throw the Tactical Camera down there and you should have the second step now checked off your task list.

Now you need to snapshot five enemies. To do so, simply enter the Tactical Camera with your assigned key/button and once they’re marked with the red icon, you’re good to go. However, you do need to avoid any incoming fire and survive until all five have been marked so your best bet is to go prone behind some nearby cover and you should be able to avoid most, if not all combat.

If you’re having trouble with that final step as maybe enemies aren’t spawning, try to wipe out most of the AI in the area and then reposition back at the spot and you should get a few to spawn.

And there you have it, all you need to know for how to complete the Who’s Watching Mission using the DMZ Tactical Camera. If you’re also struggling to complete Flight Recon, finding Game Consoles for Custom Hardware, or locating Gold Bars or Gold Skulls for The Golden Rule, read our guides for those and get those Missions finished!